Using symbols from popular culture such as Superman and Barbie, I take a tongue in cheeklook at gender and age related stereotypes. Superman without his mask is just an ordinary fellow Wonder Woman isn't young and curvy. The body of a football player sports the head of a mild manner lamb. Underneath the satirical commentary on gender roles lies a secondary theme: the notion that opposites really aren't opposites at all, but actually parts of the same whole. After doing the superheroes for several years All this thinking in terms of opposites led me to start painting antiheroes, forgetten peoeple such as the demented old and the homeless. 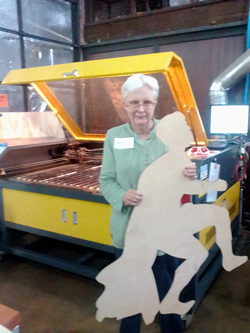 On a formal level, I am exploring the ways in which shaped cutouts differ from conventional rectangular panels. The cutouts have no "backgrounds" other than the wall they are hung upon. The cutouts arelate to each other and to the viewer in a different way than images confined to a rectangle. They are quite aggressive, claiming a space around themselves in a way that a simple rectangle doesn't With the background out of the way they occupy the viewer's space and each other's space almost as. sculptures would, but they're flat except for a one inch standoff from the wall created by the bracing that is on the back of each one.

The development phase of my work usually occurs partly in a conventional sketchbook and partly on the computer. I begin with a scanned sketch or a digital photo which I convert into a vector base outline the laser cutter can read. Once the laser work is done, I add bracing to the back of the panel and then apply gesso and paint just as though it were a conventional canvas.

Alarmed by the continued deterioration of relations between the US and Russia I have begun a new series which deals with my feelings about war in general, nuclear war in particular.

I was a six year old child when the Cuban Missile Crisis erupted. I remember doing air raid drills but they were the kind designed to help one survive a conventional bombing. One sat with one's back to the wall , put one's face on one's knees and protected the back of one's head with one's hands. I had seen the pictures of Nagasaki and Hiroshima in the Encyclopedia. I knew the adults were lying to themselves and us, pretending survival was likely. I guess you could say it was the end of my innocence.

These artworks offer no answers. They simply bear witness to a fear that probably hovers at the back of most people's minds. The exact interpretation of each piece is up to the the viewer.

These digital works actually began as watercolor figure studies which I photographed and manipulated on the computer to the point of being unrecognizable, combining them with other elements, such as uncopyrighted US government photos of nuclear explosions and various weapons as well photographs of children's toys I took myself. The digital prints are NOT Giclees in the pejorative sense of being simply copies of a digitized photograph of an artwork done in conventional media. I have actively manipulated the images in the computer adding and subtracting elements, layering images on top of one another, moving them around and manipulating colors, textures and values.